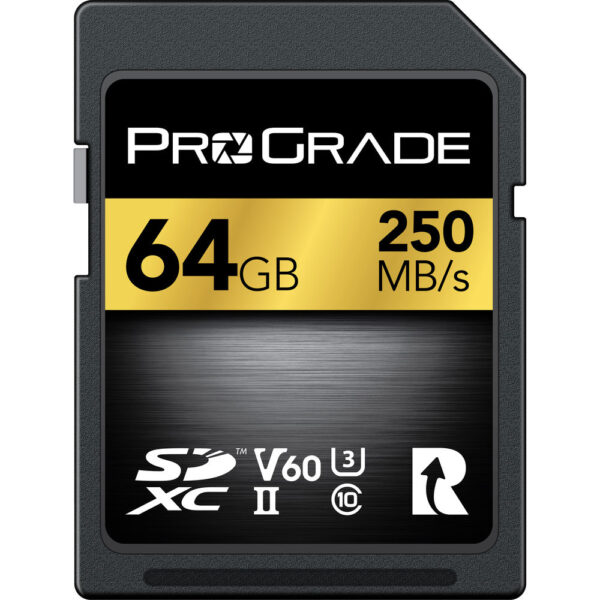 The UHS-II SDXC Memory Card from ProGrade Digital features a storage and takes advantage of the UHS-II bus to support maximum read speeds of 250 MB/s and maximum write speeds of 130 MB/s. This card has also been designed with the V60 Video Speed Class rating, which guarantees minimum write speeds of at least 60 MB/s, allowing the card to be used in DSLRs, mirrorless cameras, camcorders, and digital cinema cameras to produce 4K, UHD 4K, 3D, Full HD, and high bit rate MPEG-4 video. It is also well suited for raw photos and rapid-fire bursts.

Built for extreme conditions, ProGrade Digital’s 256GB UHS-II SDXC Memory Card is able to withstand temperatures from -13 to 185°F, allowing you to take this card with you into extreme environments, such as snow and deserts. It is also X-ray proof and shockproof, and a built-in write protect switch helps to safeguard your content from being erased. 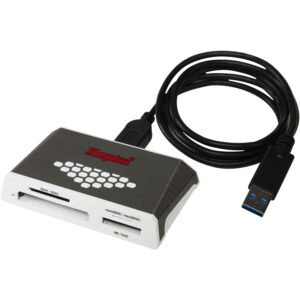 Transfer photos, videos, music, and other data between your favorite media cards and your computer with the USB 3.0 High-Speed Media Reader from Kingston. The USB 3.0/3.1 Gen 1 connection transfers data at speeds up to 5 Gb/s and supports UHS-I and UHS-II SD card speeds. Supported card formats include CF Type I and II, SD/SDHC, microSD/HC/XC, and Memory Stick PRO/Duo/PRO Duo/PRO-HG Duo. The USB media reader has a sleek design with a white body and brushed nickel case in a small form factor, with a built-in LED indicator. It’s backwards compatible with USB 2.0 ports, which is convenient for systems with limited USB 3.1 Gen 1 ports. A USB cable is included. 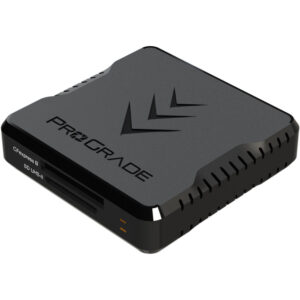 The CFexpress Type B & UHS-II SDXC Dual-Slot USB 3.2 Gen 2 Card Reader from ProGrade Digital offers a high-speed workflow to match the fast transfer speeds of their memory cards. Equipped with one CFexpress Type B slot and one UHS-II SDXC slot, this reader takes advantage of the 10 Gb/s USB 3.2 Gen 2 bus to deliver transfer speeds of up to 1.25 GB/s, or 1250 MB/s via its USB Type-C interface. Using an included metal plate, its magnetic base can be secured to your Windows or Mac system. Also included are 18″ USB Type-C to Type-C and Type-C to Type-A cables.

Please note that this reader is not backward compatible with XQD cards. 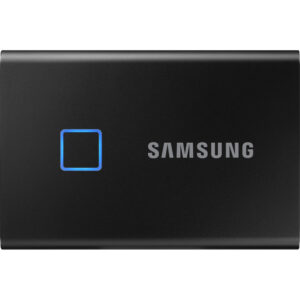 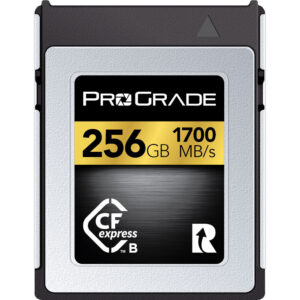 Designed for emerging mainstream imaging applications, the 256GB CFexpress 2.0 Gold Memory Card from ProGrade Digital provides read speeds of up to 1700 MB/s, which helps to quickly offload content to your computer, and write speeds of up to 1400 MB/s. Additionally, the Gold’s minimum write speed is guaranteed not to drop below 300 MB/s, which allows for the uninterrupted recording of a wide variety of codecs, including raw 4K video, 4K and 6K ProRes 4444, 4K, 6K, and 8K ProRes 422 HQ, and more. This card is resistant to temperature extremes, shock, vibration, and X-rays, and is also backward compatible with select XQD cameras that adopt firmware to enable CFexpress. This card also takes advantage of an NVMe host controller interface and backward compatibility with CFexpress 1.0. 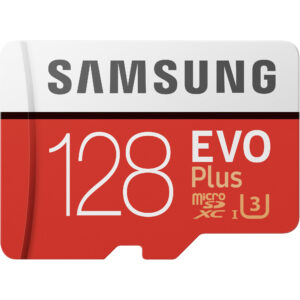 This 128GB EVO Plus UHS-I microSDXC Memory Card from Samsung holds 128GB of data. Its Ultra High-Speed Class 1 (UHS-I) bus interface enables it to achieve maximum read and write speeds of 100 MB/s and 30 MB/s respectively, which are far greater than the 10 MB/s minimum speeds guaranteed by the Class 10 and UHS-I ratings. This microSDXC card is ideal for Full HD video recordings and high-resolution pictures. A microSD to SD adapter is included, allowing you to use the card in a full-size SDHC/SDXC slot.

The EVO Plus series is waterproof (lasting up to 72 hours in seawater), magnet-proof, and X-ray-proof. Additionally, it is capable of withstanding temperatures of -13 to 185°F. Protection is provided by a limited 10-year warranty. Please note that the warranty is not valid when this memory card is used in dashcams, CCTV, surveillance cameras, and other write-intensive devices. 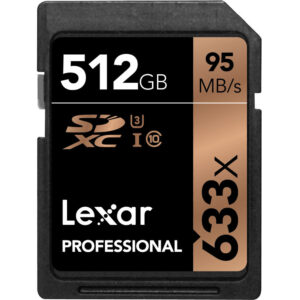 Designed for SD devices that can capture , the 512GB Professional 633x UHS-I SDXC Memory Card has a capacity of 512GB, which will allow you to shoot for extended periods of time while changing cards less frequently. It is compatible with the UHS-I bus and features a speed class rating of U3, which guarantees minimum write speeds of 30 MB/s. Read speeds are supported up to 95 MB/s and write speeds max out at 45 MB/s. This card can also withstand temperature extremes from -13 to 185°F, and a built-in write protect switch further helps to safeguard your content.