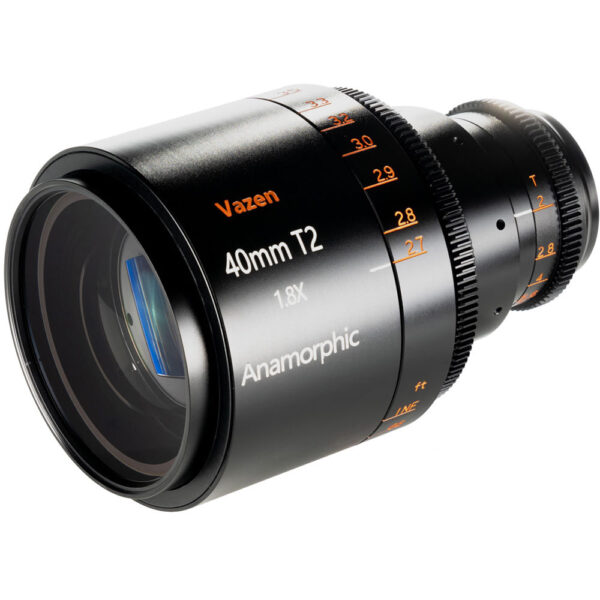 This 40mm T2 1.8x Anamorphic Lens from Vazen provides enhanced anamorphic flares and a dramatic cinematic aspect ratio to your scenes for cameras with an MFT mount. This 40mm prime lens offers enhanced blue flares, a soft, oval bokeh, and other aberrations.

The 40mm lens features a 2.7′ minimum focus distance, focus marks in feet, a relatively light weight of approximately 4 pounds, and a 300° focus rotation, and it has a 95mm front diameter to fit standard matte boxes. The lens is protected with front and rear caps and comes in a hard case for transport and storage. 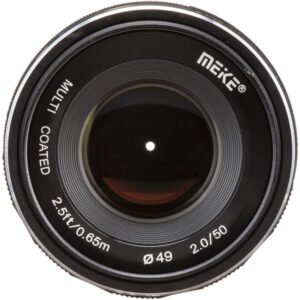 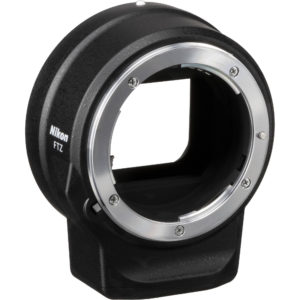 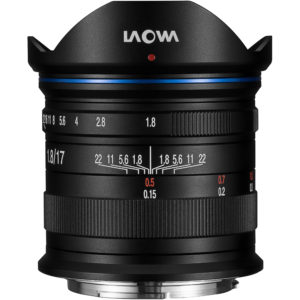 A comfortable wide-angle prime for Micro Four Thirds, the Laowa 17mm f/1.8 MFT is characterized by its especially sleek and lightweight design, making it ideal for use as a walkaround and travel lens. Despite its compactness, it sports a bright f/1.8 design for working in difficult lighting and the 34mm-equivalent wide-angle field of view suits working with subjects ranging from landscapes to portraits. One Super ED element is featured in the optical design and helps to reduce chromatic aberrations and color fringing for high clarity and color accuracy. Additionally, a Frog Eye Coating has also been applied to the front element to guard against water and dust, and the lens’s manual focus design permits working with subjects as close 5.9″ away. 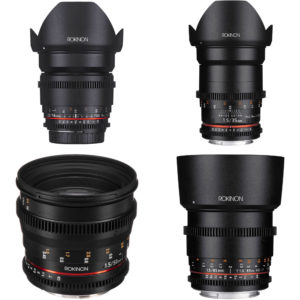 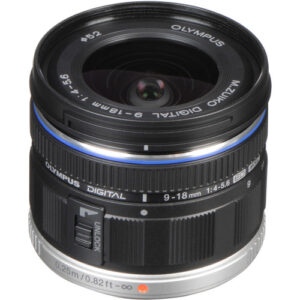 A versatile and compact wide-angle zoom, the M.Zuiko Digital ED 9-18mm f/4-5.6 Lens from Olympus is an 18-36mm equivalent lens for Micro Four Thirds mirrorless cameras. The advanced optical design couples with a retractable lens design to realize a sleek form factor while maintaining consistent sharpness and illumination throughout the zoom range. Two Dual Super Aspherical elements, one aspherical element, and a high refractive index element control spherical aberrations and distortion for notable sharpness and resolution, and one extra-low dispersion element reduces chromatic aberrations throughout the zoom range for high clarity and color accuracy. The lens is also characterized by its Move & Still Compatible autofocus system that is quick, quiet, and smooth to suit both photo and video shooting applications.

Two Dual Super Aspherical elements, along with one high refractive index element and an aspherical element, reduce spherical aberrations and distortions throughout the zoom range for improved sharpness with minimal distortion.
One extra-low dispersion element suppresses color fringing and chromatic aberrations for greater clarity and color accuracy.
Movie & Still Compatible (MSC) autofocus system benefits both photo and video applications due to its smooth, quiet, and fast performance.
Retractable lens design with a locking button maintains a compact profile when the lens is not in use. 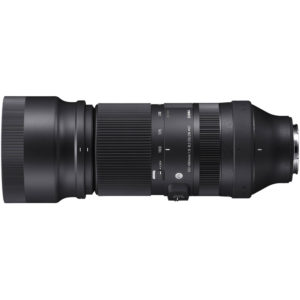 Presenting impressive reach in a relatively compact design, the Sony E-mount 100-400mm f/5-6.3 DG DN OS Contemporary lens, from Sigma, is a versatile telephoto zoom mixing a hand-holdable design with apt optical performance. A series of low dispersion glass elements are used to achieve high clarity and color accuracy throughout the zoom range, and to suppress chromatic aberrations and color fringing. Complementing the optics is intuitive handling, in which a stepping motor delivers fast, near-silent autofocus performance along with fine-tuned manual focus control. Additionally, four stop-effective optical image stabilization helps to reduce the appearance of camera shake for sharper handheld shooting and this 100-400mm is also compatible with the optional TS-111 Tripod Socket for steady shooting atop a tripod or monopod.

As part of the Contemporary line within Sigma’s Global Vision series, this lens is designed to achieve a balance between convenience and performance, and meshes a compact, lightweight build and versatile handling with notable optical attributes.

Telephoto zoom is designed for full-frame Sony E-mount mirrorless cameras, but can also work with APS-C models where it provides a 150-600mm equivalent focal length range.
One F Low Dispersion (FLD) element and four Special Low Dispersion (SLD) elements markedly reduce chromatic aberrations and color fringing throughout the zoom range for improved clarity and color accuracy.
Optical image stabilization compensates for up to four stops of camera shake to help realize sharp imagery when shooting handheld with slower shutter speeds.
Integrated stepping motor realizes quick and quiet autofocus, which is further complemented by an optimized AF algorithm to produce smoother focusing performance.
At the 100mm end of the zoom range, a minimum focusing distance of 3.7′ is available, and at the 400mm end, the minimum focusing distance is 5.2′ with a maximum magnification of 1:4.1.
Integrated AFL button can be programmed to adjust various shooting settings and the lens also features a focus limiter switch for faster focusing performance within certain distance ranges. There is a zoom lock switch to prevent the barrel from accidentally extended.
Rounded 9-blade diaphragm contributes to a pleasing bokeh quality.
Brass bayonet affords improved mounting accuracy and rigidity and rubber sealing is incorporated in the mount’s design to render it dust- and splash-resistant.

Compatible with optional TS-111 Tripod Socket for working atop a tripod or monopod; the included PT-31 Protective Cover can be attached to the lens to maintain a seamless appearance if the tripod socket is not used.